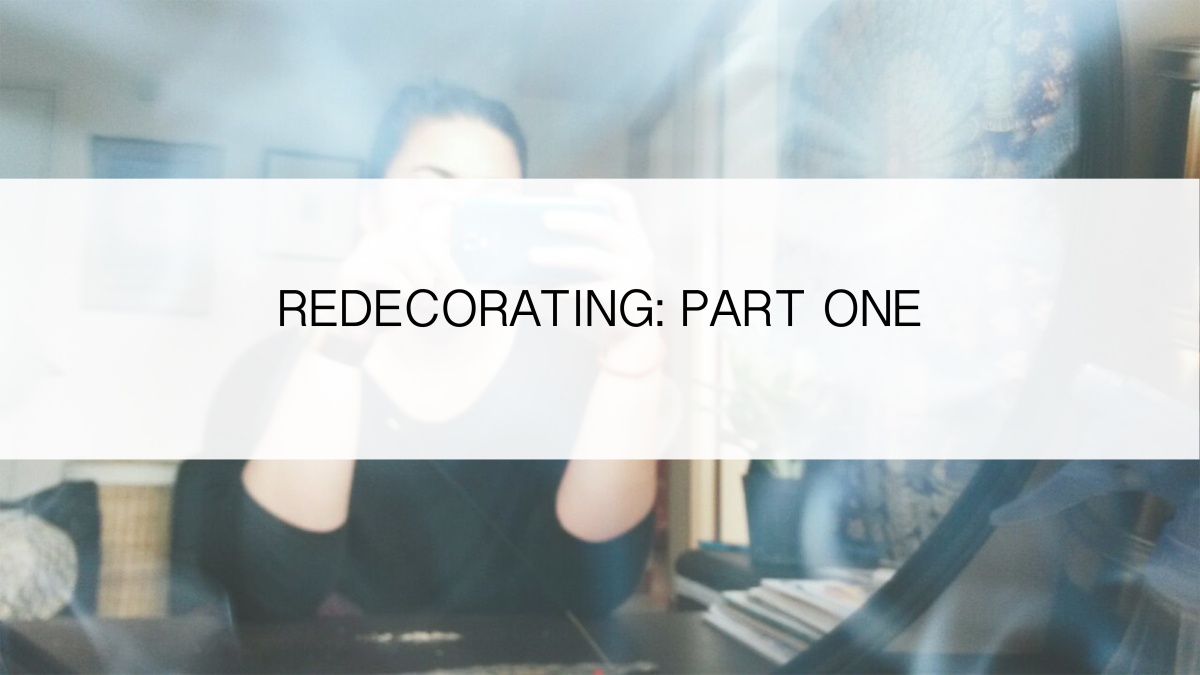 Here’s a quick post that’s basically me showing off a new(ish) rug.

After years of living in Manila, I felt that it was time to revamp my place. This condo has seen several people come and go. I first moved in here with my older sister and her family (husband, baby and the yaya) back in 2010. When she graduated, she moved to the province of her husband which led to me and Annie living alone for a while. Annie eventually moved out after graduation because her new job was situated in Quezon City . In between all this, we’ve had several furry visitors (4 cats and 5 dogs) come and go as well.

When I decided to redecorate the place, I didn’t have the capacity to do everything in one go. The floor was my biggest problem because they’re in the shade of a dirty peach marbling. But since I’m poor and retiling is not only laborious but expensive, that’ll have to wait.

What I did instead was I moved around the furniture and added small but new elements to the space. I’m not formally trained in interior decorating but I did have the power or the internet. Let’s just say Pinterest was my most used app during all this. 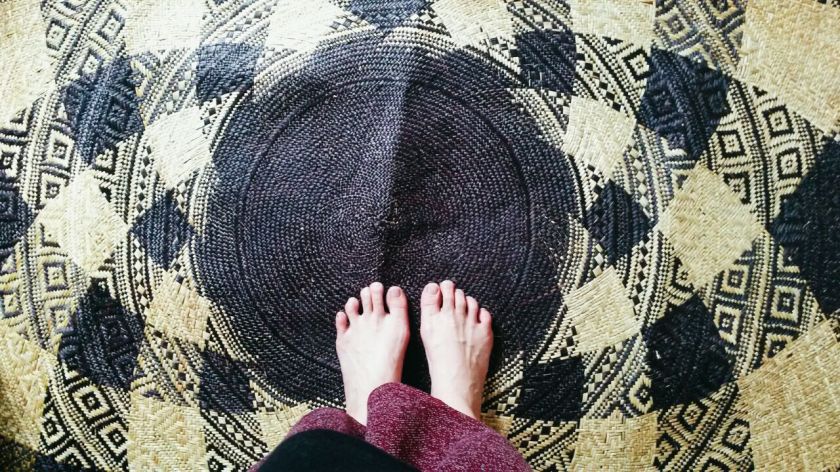 Bought this rug/banig last Christmas at Greenbelt 5. I knew early on that I wanted to infuse a lot of natural textures and color to the space so I kept an eye out for local crafts in bazaars and online. I brought in some greenery (bought from Cubao) to add color and to see if I can actually take care of something that wasn’t a dog. 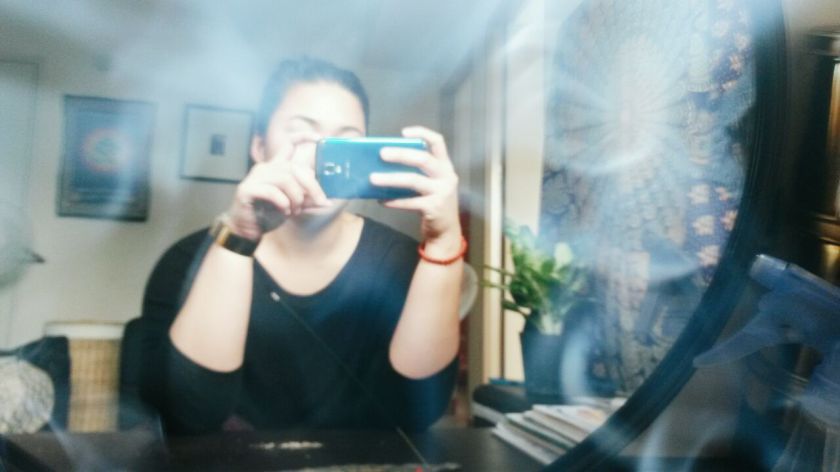 After going through several websites, OLX ads and Facebook groups, I’ve come to realize something that Manila has been missing: eclectic-border-bohemian inspired home pieces. I have been obsessing over these maximalist-themed interior decorators on Instagram and every time I click on tags to the brands they get their stuff at, it’s always way too expensive or they don’t ship to the Philippines. It’s frustrating since I’m on a budget and I don’t want to settle for buying all my things at the SM Department store.

I’ve actually been toying around with the idea of starting my own online shop wherein I sell the kinds of items I’ve been looking for at affordable prices. You’ll be able to find incense holders, tapestries made in India, wooden boxes, etc. Thinking of also selling my bayong with the pompoms.

What do you think? What are things you’ve been wanting to get for your space but aren’t accessible atm?

*Photos taken by me using the Samsung S4 camera.

A collection of film photos that were forgotten but deserve to be shared. 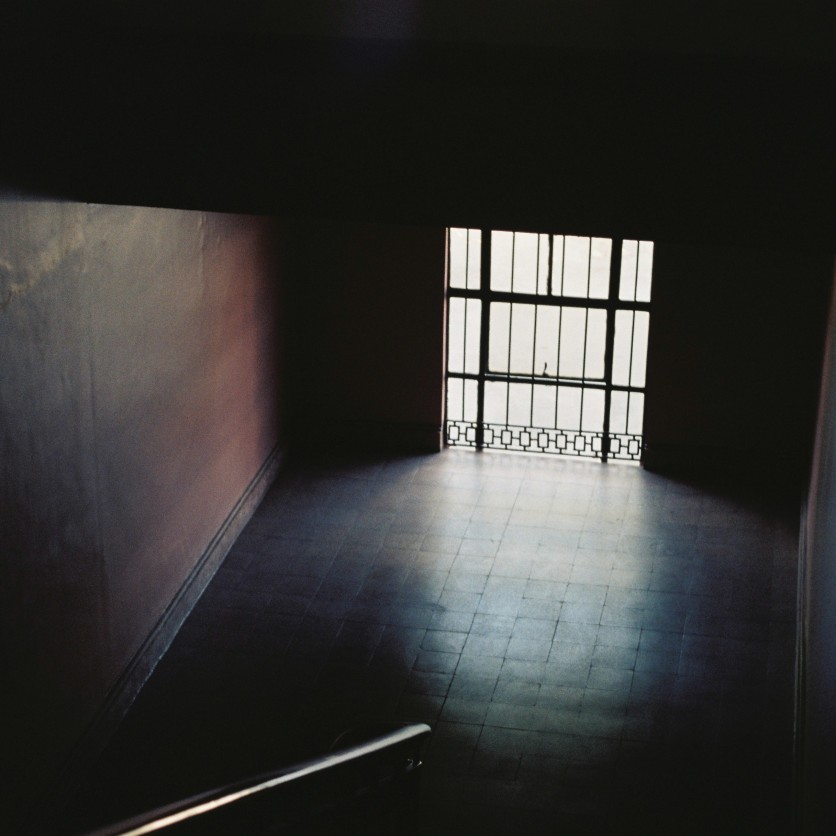 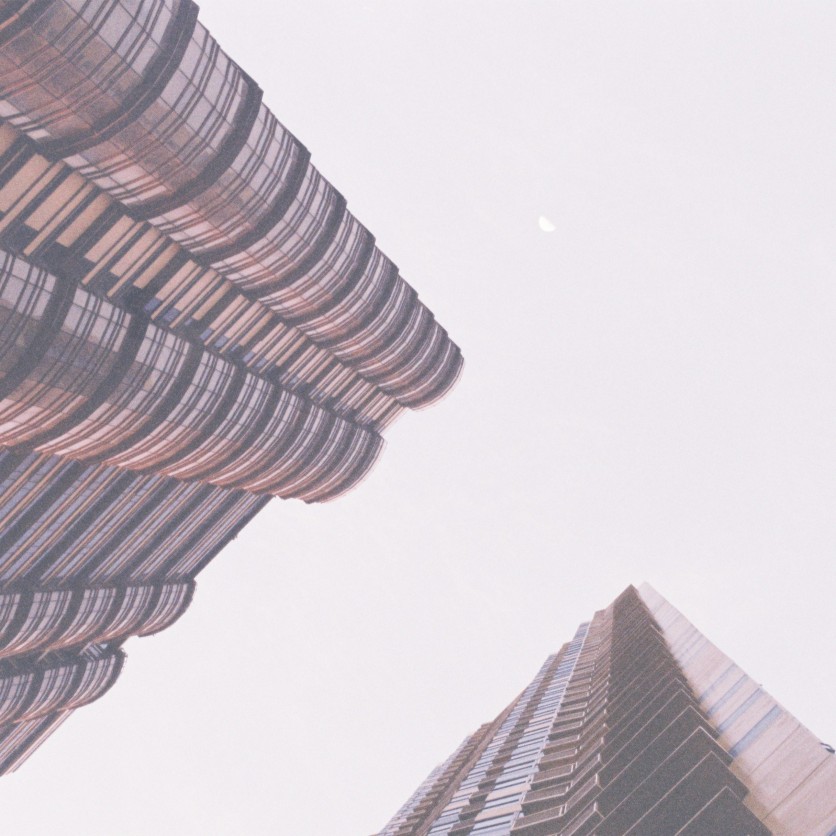 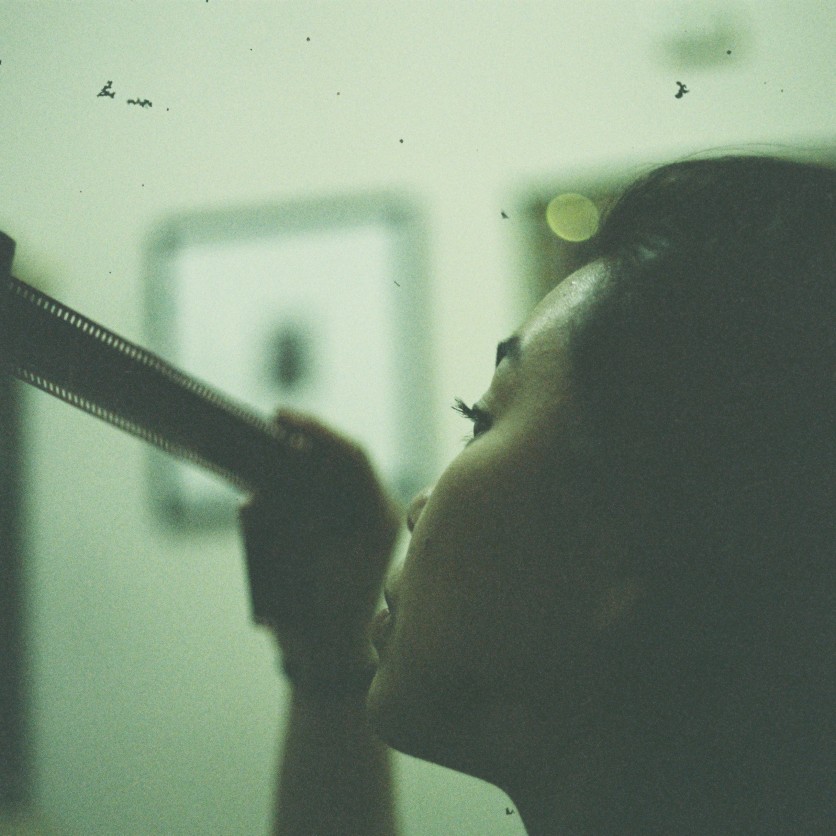 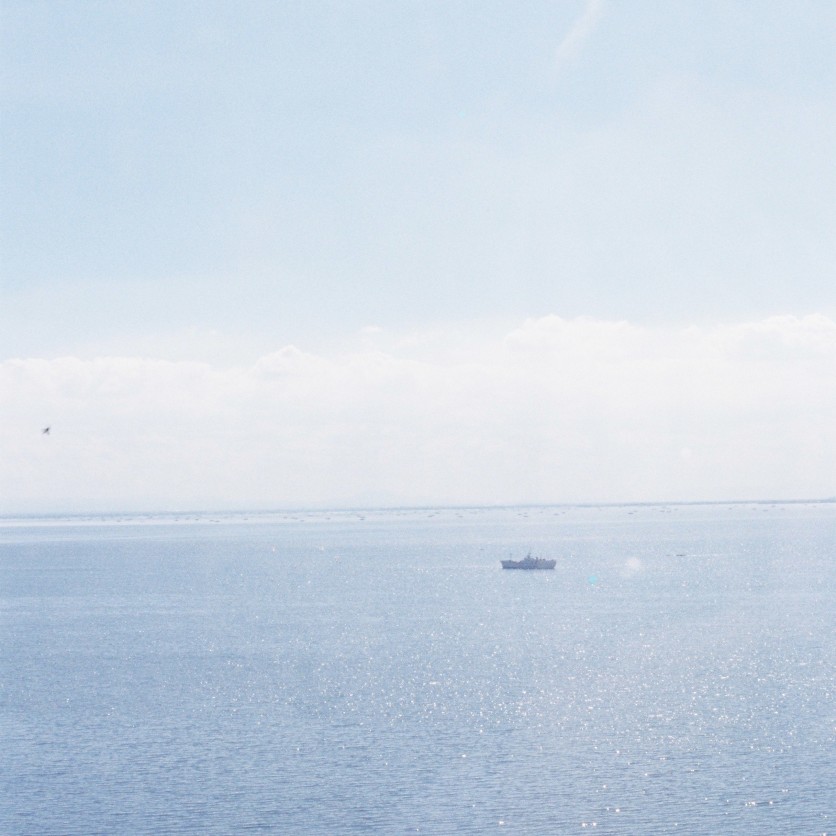 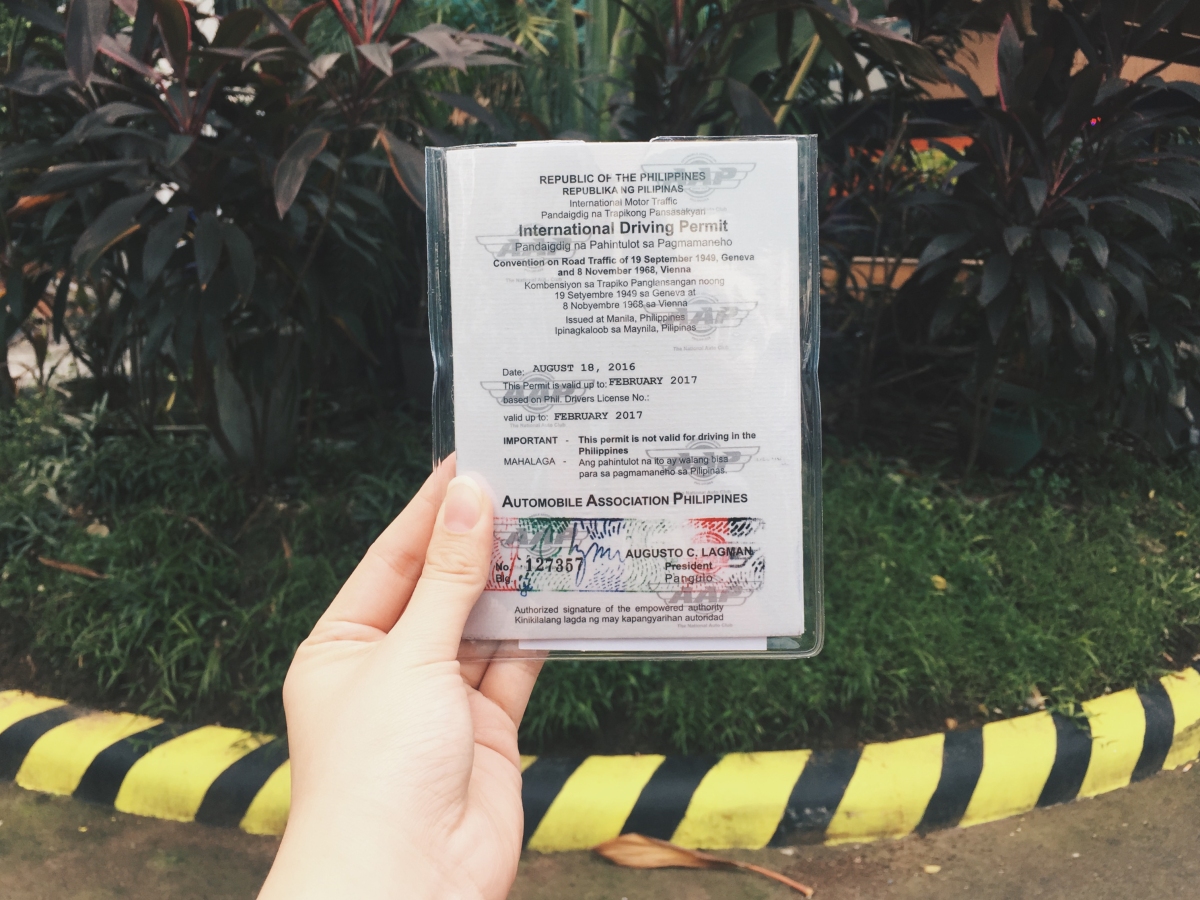 Since leaving my job at VR Inc., I’ve been through a rollercoaster of events and it’s only been a week! My close friends know how random my days can be so they’re used to me suddenly disappearing and resurfacing elsewhere. But of those of you who are still getting to know me, allow me to give you an idea what a “normal” week is like.

Saturday night: Booked a flight to Legaspi City to see my mom (happening the following Monday)

Saturday was my Mom’s birthday and I could feel through the phone that she wanted me to visit her before the big trip. After checking and comparing prices, I bought a plane ticket for the following Monday (the 15th).

The hardest part of leaving Manila is dropping off Elvis and Allie at my sister’s (that and leaving my sister behind as well). They always always know when I’m leaving Manila because they get extra clingy and have really long faces when it’s time to shut the door.

END_OF_DOCUMENT_TOKEN_TO_BE_REPLACED

I never talk about my day job; I guess I’m just a private-person like that. But since August 2015, I’ve been working at Vania Romoff Inc. which ended this week.

And before you ask: No, there is no vacancy at Vania Romoff Inc.! I already found and trained a perfectly capable replacement to take over my duties. But if you are interested in applying, you can send your resume to info@vaniaromoff.ph so that you can get an email if in case something opens up.

END_OF_DOCUMENT_TOKEN_TO_BE_REPLACED

I love people watching. A few years back, I used to do this thing where I make commentary on whatever I see at the airport and make snarky posts about it on Twitter. That was when the system of NAIA was extra shitty (but as if that’s gotten any better today) and there wasn’t much to do except post tweets on my airport adventures.

Lately, I don’t do that anymore because I decided that I should be a respectable adult (lol) that does adult things like read a book or take a nap while waiting for my flight. 2015 was not a travel-themed year and so I only left Manila twice . The first of the two being when I had to go home for my great grandmother’s 100th birthday celebration (mid-July 2015).

I call this “Adult things to do at NAIA 2”

END_OF_DOCUMENT_TOKEN_TO_BE_REPLACED 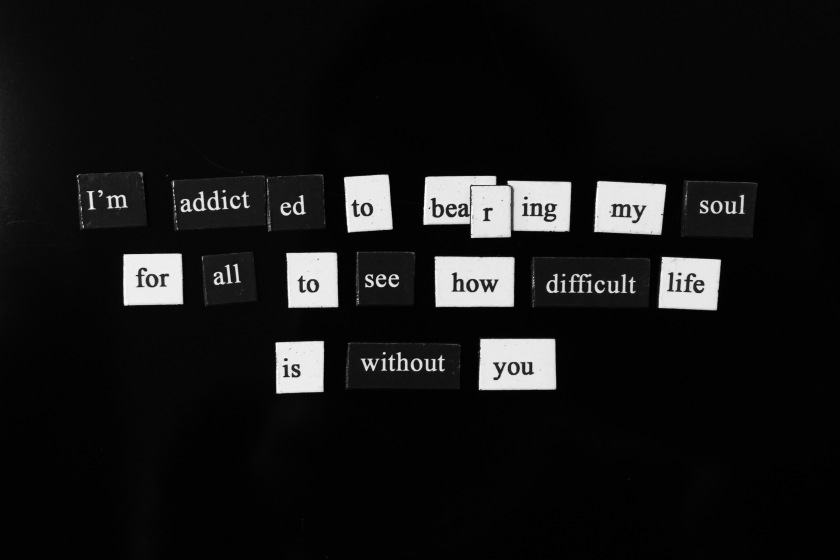 END_OF_DOCUMENT_TOKEN_TO_BE_REPLACED

In 2015, I struggled with finding a creative outlet to keep me sane while I worked my dreary day job. I tried joining an online art class and started a sketch-a-day project (among other creative projects) and, surprise surprise, I wasn’t able to stick to any of them.

So this year, I’ve decided to “try” and rekindle my high school love for writing. I used to write for the school newspaper (only features because I can’t for the life of me, write anything news related) and kept journal since the first grade so maybe this’ll stick for the whole of 2016.

The rules are simple. Just keep piecing together words until I see something post-worthy. There is no limit to my posts nor is there a required amount of posts. Just. keep. creating. 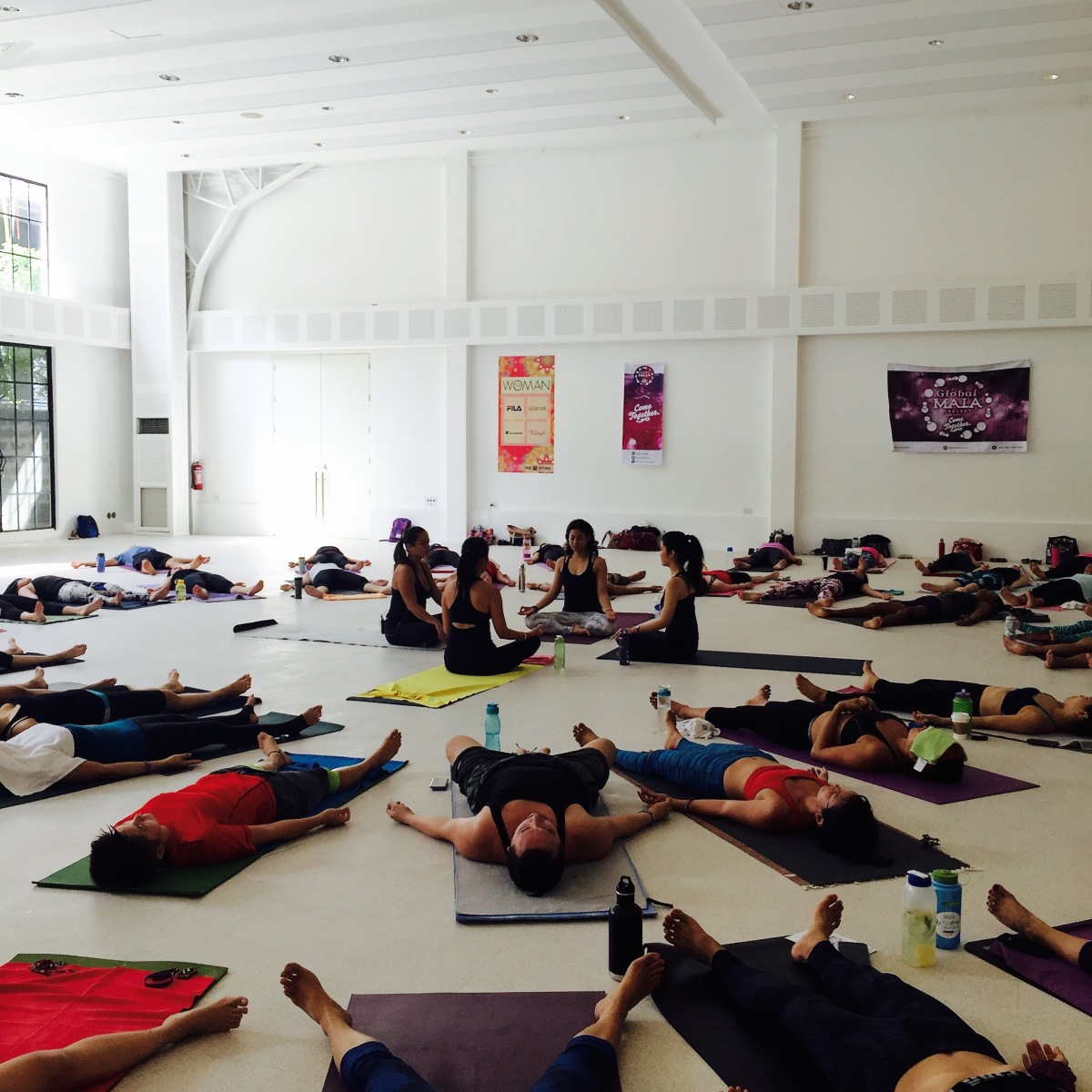 Going to the Global Mala Project has been a mini tradition for me and my best friend, Angel. Our first year was back in 2013, months after we started learning yoga together back in Bacolod (see here). We were so excited and I made sure that we stuck to our agreed schedule of classes. This year, we decided to return to the Global Mala Project as volunteers. We got to meet and talk to other volunteers/yogis as well as attend classes FOR FREE (which by the way was the best part). Angela and I took the morning shift so by 1pm, we were already on our mats.

We attended a total of 3 classes and 1 talk. My favorite class would have to be Gateway to Freedom: Core Awakening Flow Yoga by Christi Christensen. Not only was her personality infectious but what she was teaching us was exactly what I needed. To be honest, when she was repeating over and over again that we should let go and love ourselves, I started to tear up. I had a hard time blinking back the tears; good thing that I was sweating so much so nobody could tell if they were actual tears or my sweat.

These photos are not arranged in order of events and are a mix of when I was volunteering and photos I took before and after classes begun. Excuse the selfies, most of those were Angela’s idea. 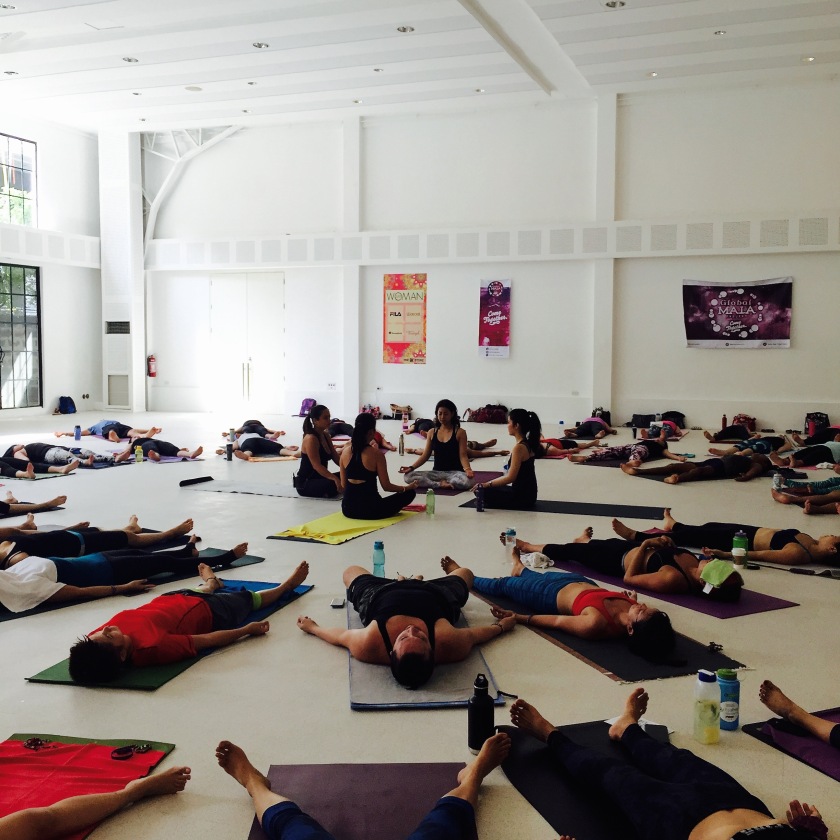 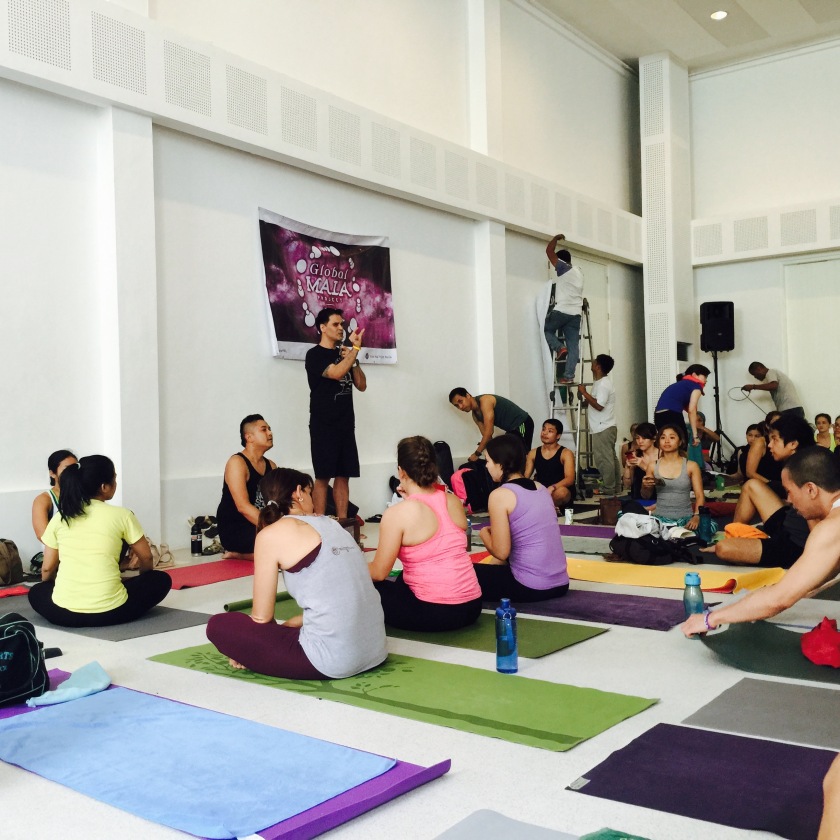 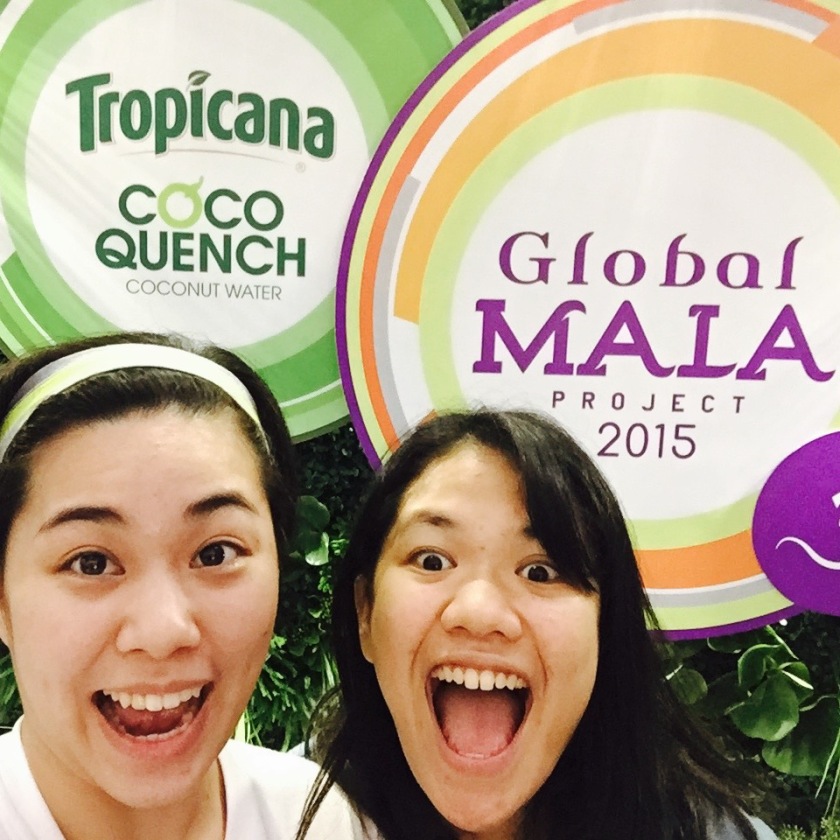 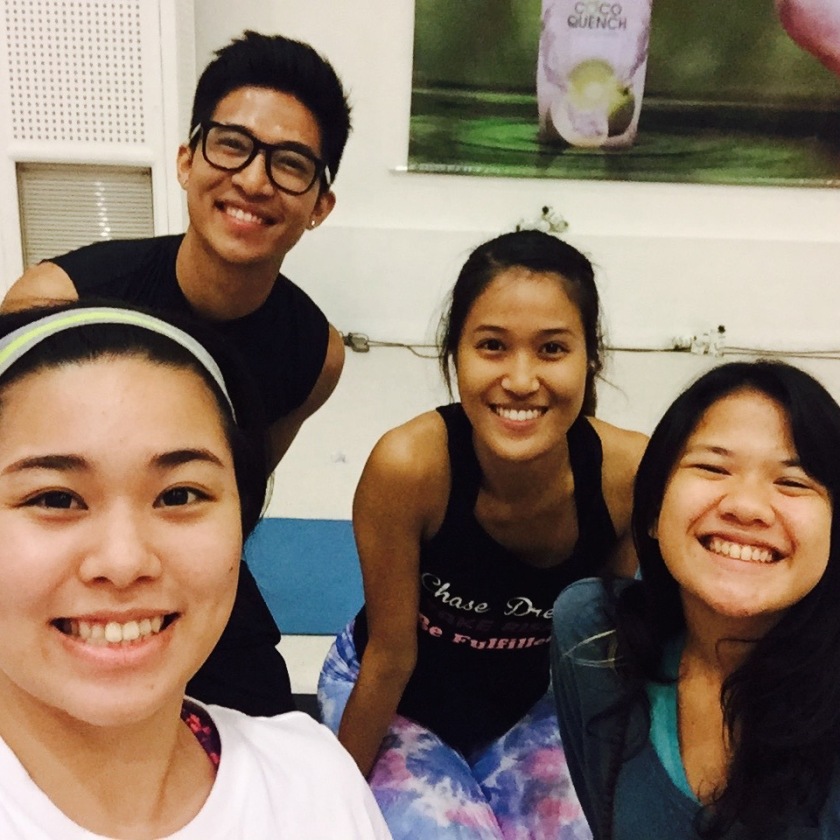 I know I mentioned  that I haven’t had a proper workout since the start of my graduation collection. That’s roughly a year of being stressed/busy/lazy bum. I enrolled in a gym last August to help get myself back in shape. I have a personal trainer named Spike who bugs me almost everyday to work out so that’s really been helping me out. I have gained a total of 30 pounds since I stopped working out. So you can just imagine the struggle of taking classes one after another during Global Mala. Honestly, I had only taken two Flow classes (after x number of months) the week prior to GMP so my body was DEFINITELY not prepared for the physical strain. 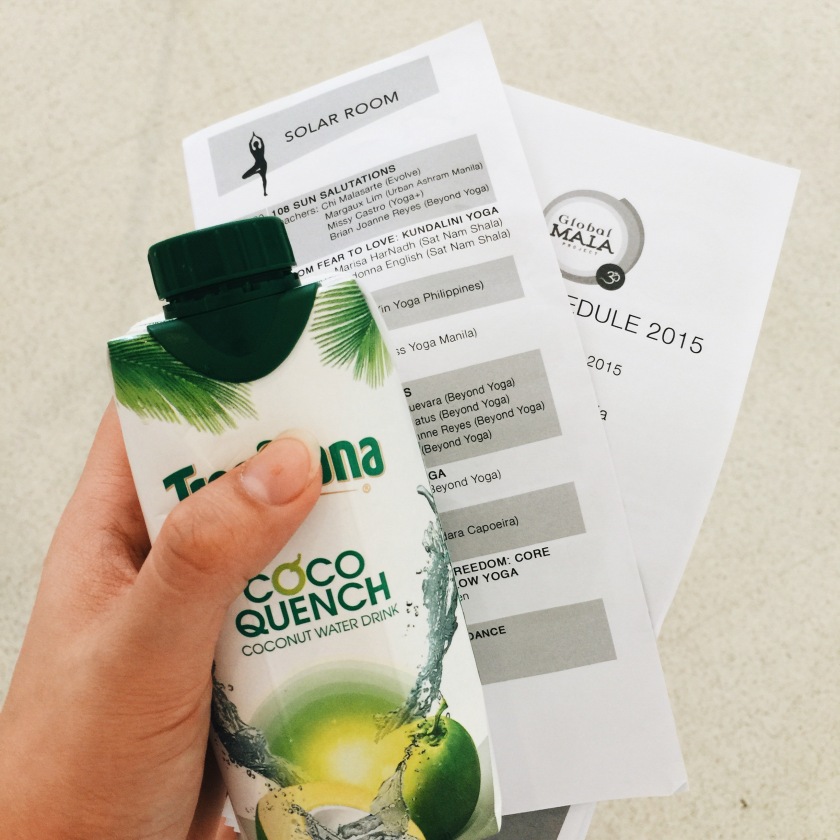 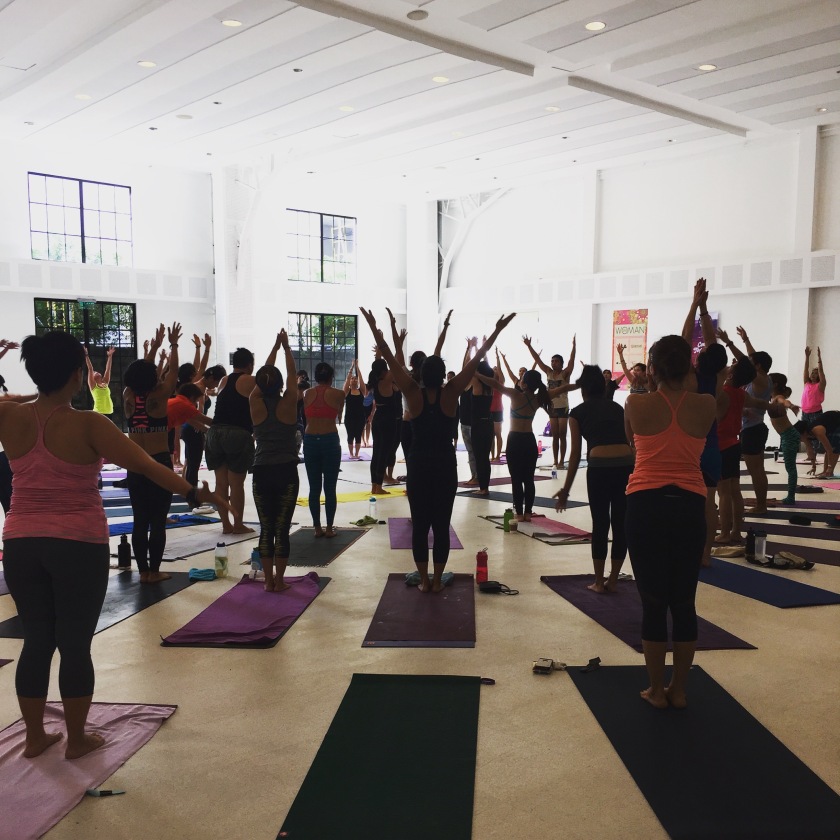 This year, I had a lot of time to reflect on my current situation and how bottled up I’ve become. I am honestly not the type to keep things to myself but during Christi’s class, I couldn’t help but feel lousy. It was like she knew what I was unconsciously going through and her energy just woke up something inside of me. I still can’t explain what exactly happened in that flow class but from it, I know that I have to cut myself some slack and relearn everything all over again.

So since GMP, I’ve slowly shifted to a Pescatarian diet, gone to yoga more than once this week and work out at least once a week. I’m trying to not harbor a lot of negativity during the day and I am slowly letting go of my worries and fears for the future. I try as much as possible to journal everyday too, a habit that I’ve let go off because of an insecurity.

I still have a long way to go but this has been the most peaceful my mind has been for months now. I’m just trying to go back to going with the flow. 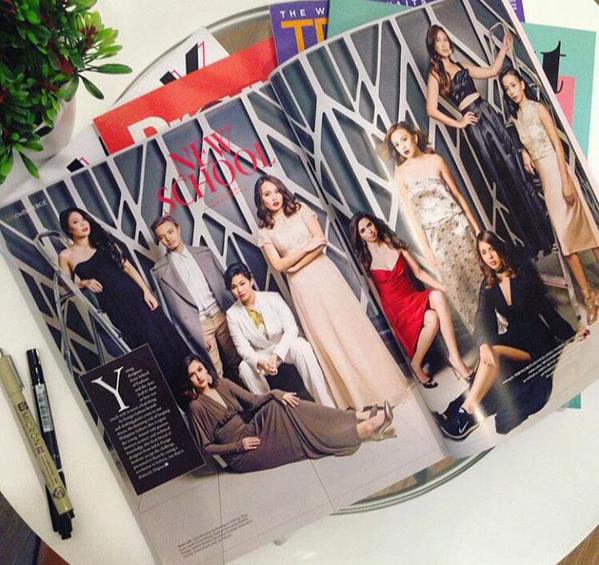 I don’t usually post anything work or fashion related on this blog but I felt that I had to make an exception for this. Last month, me and 9 other SoFA Alumni were chosen to be a part of a special feature by Metro Society for their September 2015 issue. Yesterday, the feature was finally released in our local bookstores and today, it blew up all over our small SoFA community.

Yes, that is me in the white suit. Besides the fact that I had nothing to wear (mostly because all my old clothes don’t fit anymore), it only seemed right that I break the norm and went as the only girl in a “suit”.

I read my Q&A portion and I couldn’t help but lol at how some of my answers were rephrased. More on that in another post.

If you’d like to read my or one of my fellow designers’s interviews, grab a copy and feel free to tell me what you think! 🙂

Last week I got some awesome news that I was chosen to be part of a magazine feature! The article will feature 10 SoFA designers from different batches. Majority of those chosen are good friends of mine so the shoot was really more of a catch-up session. The only photos I have from the shoot are selfies (actually not even because they’re photos with friends) so I grabbed a couple from Nika for this post. There’s only five of us in the photos because we were separated into two batches. They’re planning to just photoshop the two groups together for the spread.

The shoot’s theme was obviously formal but hell no am I wearing a gown (also because I don’t have one and refuse to buy one) so I went with the blazer + slacks that I bought from Zara for the Preview ball instead. It was a hit because it really made me stand out. My inside shirt is actually from ukay in case you were wondering.

We’re not allowed to share what magazine we’ll be featured in but it’s coming out next month so I’ll be able to post about it soon.